In the previous article, I have explained everything about Date and Time column type in SharePoint lists. We have seen the different behavior of the column in Lists. Now, in this article, I will be explaining Lookup Column type in detail and will also cover the following topics in detail.

Consider a scenario where you have to maintain the information of the employee and its departments. So, if you are in the SQL Server database then in that case what you will do is, you will use third normal form and design two different tables. One will be Department Master and other will be Employee Master. And later you will create Department ID or Department Name as a Primary key and use this primary key in Employee table as a reference key or foreign key. By using this method we will maintain the relationship among multiple tables. Now, coming to SharePoint, earlier we have already discussed many times that SharePoint stores the data in lists. So, now if we want to create a Department and Employee list then you will need a primary key and foreign key. For primary key SharePoint, we already have ID column which always has unique values and ID column and cannot be null, but what about the foreign key? SharePoint has a very cool column type for this feature called as Lookup columns. Let’s understand this cool column type in details.

Introduction to Lookup Columns in SharePoint

Whenever we have to create the relation between two or more list then, in that case, we can use the Lookup column type available in SharePoint. Lookup column is used to display the item from one list to another list. It is very similar to Choice columns of SharePoint. Please note that if lookup column is list level column then you can fetch the values from same sites only.

Creating Lookup columns and its properties

One of the important features of having a primary key and foreign key in SQL table is cascade delete. It means that if it is configured, then the user cannot delete the data from the parent list or parent table if that data has been referenced in any of the other table. The same concept is available in SharePoint. The concept comes with a name “Enforce relationship behavior”. For more information please refer to the following image.

By default the option is unchecked. If it is checked then in that case we would have 2 options.

While entering the data to the lookup columns, you will have a drop down filled will the values from the selected columns of the parent list. By default “Allow multiple values” option is unchecked, so you can select only one value from the lookup drop-down. For more information refer to the below image.

And if “Allow multiple values” is checked, then in that case you will have the option to select multiple values from the drop-down. Please refer to the following image for more details.

If you have selected multiple columns from “Add a column to show each of these additional fields” then the columns will be displayed.

The values such as Lookup: Task Name and Lookup: %Complete will be not editable from the child list as these values are displayed from the parent list. 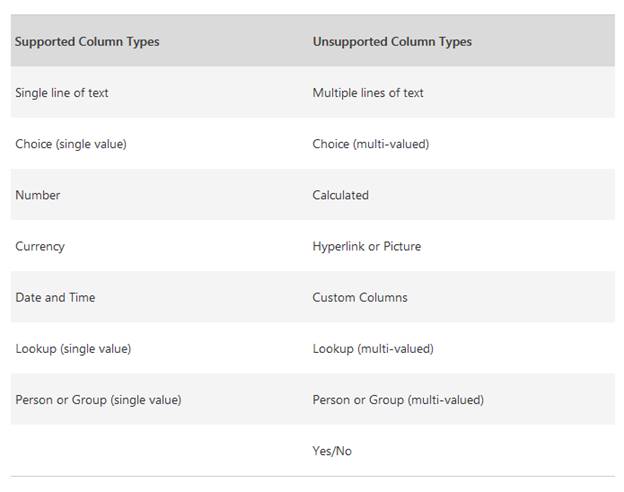 In my next article, I am going to cover Hyperlink or Picture column types in details.

Any question or feedback or suggestion, please do comment and let me know.